Eureka! A Story of the Goldfields – Wilson, Mark 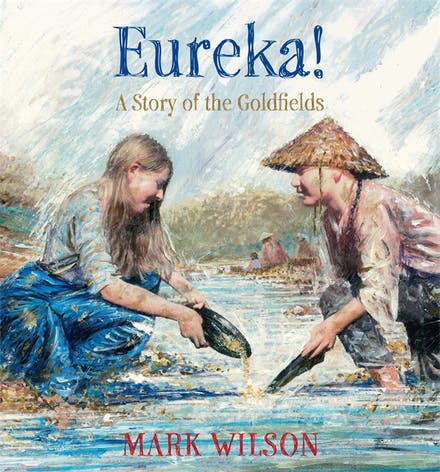 Eureka! A Story of the Goldfields

Historical fiction, when told from a first person perspective, can successfully engage young readers, as the case here. The authentic illustrations, appearing in oil or gouache, capture the Ballarat, Victoria goldfield settlement, the goldminers and their equipment, soldiers and the Australian environment in rich detail. The character of young Catherine is based on an English immigrant who came to Australia when she and her Papa left London for the goldfields. Nine months at sea. Mama dies of typhoid fever. Father and daughter finally arrive, but every gold-mining spot appears taken, until they meet young Chen who offers help. He is a 16-year-old Chinese boy, here alone, hoping one day to bring his mother and sister over from China. He too is based on an historical person, Pan Ah Shin, a teenage boy who emigrated from Canton, China in 1851. There is much prejudice against the Chinese on the goldfields and they are poorly treated. The next day a policeman arrives demanding the family’s license to mine for gold and threatens imprisonment if payment is not made. This picture book features the Ballarat gold miners’ rebellion against the high license fees and the Victorian government’s refusal to grant them land where they work. Tensions continue to build. Peter Lalor, an historical figure and one of the miners, speaks to a gathered crowd and persuades the miners to claim their rights. They build a stockade and refuse to pay the licence fees. The soldiers attack with a devastating loss of life. The back endpapers provide a valuable timeline detailing the build up of tensions between miners and solders, the Eureka Rebellion and the aftermath. Peter Lalor, who was a leader in the rebellion, is later elected to the Victorian Parliament. This book can be compared to Alan Tucker’s, picture book, ‘Rebellion at Eureka’, which offers different characters’ viewpoints while also detailing the Eureka rebellion.