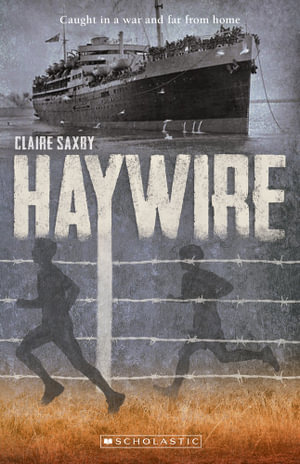 ‘Haywire’ is a vividly told historical fiction novel set in the year 1939. The story is told through the alternating perspectives of two 14-year-old boys who become friends. Through them, readers gain insights into the different perspectives of people living through these times. Max Gruber is German and his parents are viewed as anti-Hitler therefore Max is in danger too. He is sent to stay with his Uncle Ferdy in London to be safe. Both, however, are classified by the British Government as ‘enemy aliens’ and sent to an internment camp in Hay, a country town in Australia. Max’s journey on board the ‘Dunera’ reveals the dismal treatment of those deported from their homeland and on this particular ship. At the same time in Hay, 14-year-old Tom Hanlan sees his two older brothers off to serve in the war, leaving him to help his father in the bakery. His hopes of attending a school in Sydney, then University are dashed. These two boys meet during bread deliveries to Hay’s internment camp and become friends, exchanging perspectives in an open, nonjudgmental way. Chapters alternate between Tom and Max, each revealing their dreams for the future. In a chance moment, Max escapes the internment camp, determined to go home to Germany. He experiences, as a novice, the hostile environment of the Australian bush and suffers dire consequences. ‘Haywire’ cleverly portrays different attitudes towards the war. Tom’s mother is angry and constantly on edge, adamant that the internees are dangerous. Tom’s father represents the voice of reason and empathy. Minor characters also play an important role. ‘Haywire’ is a fast-paced, exciting read with vivid imagery and characters with deep emotions, giving young readers an opportunity to experience what life might have been like during these times. Readers may also be inspired to pursue more information.