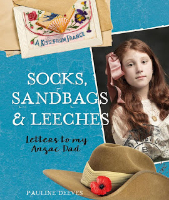 Socks, Sandbags and Leeches Letters to My Anzac Dad

The time is World War I. Ivy and her mother have moved in with Aunt Hilda which involves little space and Ivy emptying Aunt Hilda's chamber pot! Ivy writes letters to her father, who is fighting overseas. She tells him about life at home—increasing prices, work for the war effort, attacks on German shops and churches, being patriotic, conscription, and wounded soldiers. Each letter reveals life at home—how she and other children sew sandbags, knit socks and roll up bandages for the war effort collecting leeches for the hospital and other fascinating details of life at that time.