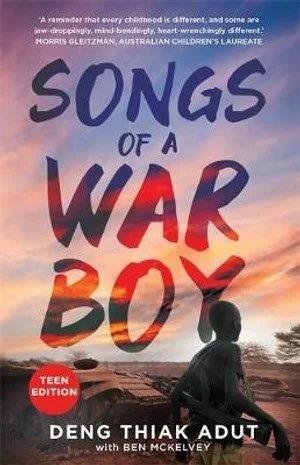 Songs of a War Boy

Den Thiak Adut is six-years-old when war comes to his village in South Sudan. He is taken from his family, conscripted into the Sudanese People’s Liberation Army, taught how to use an AK-47 and sent to battle. He is shot, plagued by illness and experiences the horrors of war. There appears to be little hope for the future. His half-brother, John, rescues him after five years and both become the third Sudanese family resettled in Australia. He works in a local service station and learns English watching ‘The Wiggles’ and reading the Bible. He teaches himself to read and studies at TAFE then later completes a law degree at Western Sydney University and a Master of Laws in Criminal Prosecution at Wollongong University. Den Thiak Adut is the first person in his family to graduate from university. His story is confronting and best suited to a mature reader. In the prologue to this biography, he states, ‘Yes, I have had a difficult life. I’m proud of some things I have done, and ashamed of others, but I own all of it, and I’ve reconciled with all of it. That’s why I am whole.’ Deng Thiak Adut received Australian citizenship in 2001. He became a refugee advocate and for his achievements, chosen as the 2017 New South Wales Australian of the Year.