NCACL artwork frameworks has grown as the result of illustrators being asked to donate examples of their artwork.  In 1974 the collection consisted of book titles with research files about authors and illustrators. When the collection moved to the then Canberra College of Advanced Education,  the artwork collection began to grow.

The value of illustrations and artwork has become clear.  For the artwork includes the experimentation with techniques, preliminary illustrations and much more.  Such work presents a visual narrative, essential to telling the storytelling process.

Copyright and donations
In 1998 the National Centre was approached by Robin Trantor, one of Pixie O’Harris’ daughters.  She wrote on behalf of her sisters. The family wished to donate 95 original illustrations relating to The Wind in the Willows.  Furthermore they wished to donate the copyright in the artwork.  They explained that they wanted the illustrations kept together in one place. Preferably where they would be available to researchers and occasionally shown to the public.

Exhibitions
In 2000 the National Library of Australia exhibited 15 of Pixie’s works to complement their own collection.  While in 2013, 23 illustrations from The Wind in the Willows featured in an exhibit entitled “Virtues, Vices and Victories” held at the Canberra Institute of Technology.  An evening of discussion at ALIA House about Pixie’s artwork  attracted a large, interested audience fascinated by her techniques.

Describing the artwork
All artwork collected or donated by various donors since 1974 has been described by NCACL specialist volunteer staff.  Responsibilities for documenting, preserving and providing access are taken professionally.  This has resulted in the development in 2008 of an artwork framework template.  This means that each piece of artwork is individually managed.  A description of the image, its size, media and condition are created.  A unique number is assigned to each piece of artwork. Associated preliminary material, such as storyboards, dummies, correspondence, publicity material and reviews are included when donated. 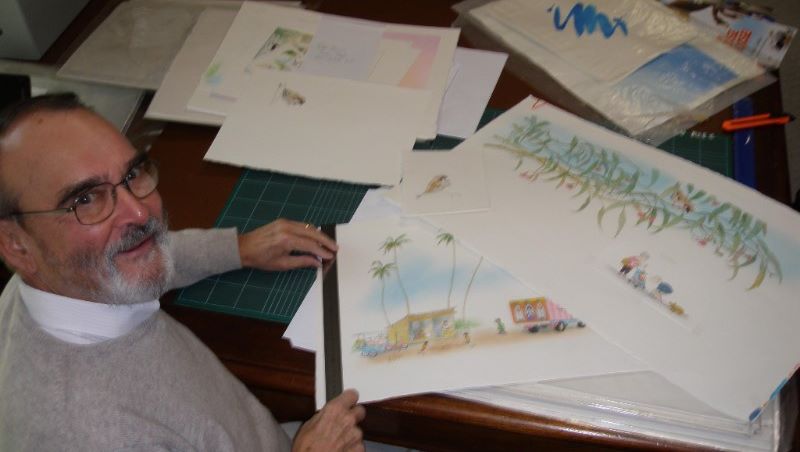